On the occasion of the Congress of the Future, an space for exchange of ideas between Chileans and world class thought leaders, Millennium Science Initiative organizes two activities, which are free and open to the public, in Valparaíso (Chile). The first one, which will take place on 22th January  2016.  It will be a conference in cooperation with the German Max-Planck Societ. The purpose is to deepen the collaboration and to spread the work of these centers to the rest of the scientific community.  The other two events are an opening table on “Science and Development” and a Plenary Conference carried out by PhD  Peter Seeberger, Director at the Max-Planck Institute for Colloids and Interfaces.

The third  workshop Chile-Japon on Nonlinear PDEs, which was partly supported by CAPDE along with Japan funding, took place in Osaka University from 8 to 11 December 2015.

It was aimed to bring together experts in the field of nonlinear partial differential equations from Chile and Japan. The meeting was intented to present recent advances in the area, whose problems play a key role in modeling biological pattern formation, mathematical ecology, material science and superconductivity, among other fields.

“It is very important for the Chilean and Japanese groups the interaction, to know what the others are doing, as well as to strengthen the possibility of postdoctoral exchanges”, pointed out Manuel del Pino, main researcher of Capde.

Topics covered included semilinear parabolic system, singular perturbation problems or competitive system of chemotaxis. The event was attended by 60 people and 22 speakers, 11 of them from Chie.

So, Del Pino, in his abstract “Bubbling in the critical heat equation: the role of Green’s function”, explained the point-wise, infinite-time bubbling phenomenon for positive solutions of the semilinear heat equation at the critical exponent in a bounded domain. On the other side, Claudio Muñoz´s abstracts was entitled “Dispersive estimates for rational symbols and local well-posedness of the nonzero energy NovikovVeselov equation”. Alexander Quaass talked about large solutions for some local and non-local nonlinear elliptic equations Break and Mónica Musso foucused on a non-compactness result on the fractional Yamabe problem in large dimensions. Also Ignacio Guerra shared his investigation, on“Multiplicity of solutions for an elliptic equation with a singular nonlinearity and a gradient term”.

Participants agreed to celebrate the fourth edition of this workshop in 2017 in Universidad Federico Santa María (USM). The first workshop was held in 2007 at the Center for Mathematical Modeling (CMM) of Universidad de Chile and the second in 2010 in Tokyo.

For more information, see the website of the 3rd Chile-Japan Worshop on Nonlinear EDPs.

“Nice Concepts- a poetic walk through mathematics” , the educational video supported by Capde and produced by  the Department of Mathematical Engineering of Universidad de Chile, is already available on youtube.  It explains different mathemtical notions, for instance, Brachistochrone curve or Geodesic.  These concepts are presented by professors of the Departament. Two of them are Manuel del Pino and Claudio Muñoz, CAPDE´s researchers too. They talked about the heat equation, which studies how temperature vary deppending how far or how close the energy source is. This area of study is very useful to understand mutiple phenomen, such as the temperature in a room or tumors. That is because the behaviour of the heat, which is known as thermal diffusivity , is always part of the nature. This instructional video is conducted by professor Cristián Warnken.

Nicolás Varela, CAPDE postgraduate researcher, participated in the activity “Young people with Science” that was organized by Iniciativa Científico Milenio (ICM) and held in Concon, close to Valparaíso, on 26th and 27th November 2015. The meeting was aimed to think science  from an  interdisciplinary point of view in order to contribute to the development of the science in Chile  and how, at the same time, it can help to the country´s development.

“It was an interesting occasion to meet other students that are part of ICM. It was very useful to make social and professional contacts”, pointed out Varela, who currently is studying a Master in Mathematics at Universidad Federico Santa María (UFSM). His specialization areas are patterns of concetration, elliptic operators and structural analysis, specifically seismic insulation modelation. 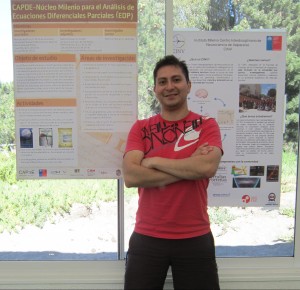 During the activity, he showed a poster that describes and explains Capde´s work. “Attendees showed a great interested in the research that Capde is carrying out. Some of them also were surprised to know what can be made based on pure mathematics”, he added. As Varela, other young researchers belonging to more than 30 centers  made presentations.

As a result of the discussions, the creation of a governmental consulting entity in the field of the science and education programs addressed to the society were proposed.

The Factulty of Physical and Mathematical Science of Universidad de Chile received on 21th October 2015, the visit of Virginia Garretón and Soledad Hevia, Executive Director and communication analist of Iniciativa Cientítiva Milenio (ICM). They met Capde Capde´s members, including young and senior pr researchers, as well as staff.

Manuel del Pino, main researcher and National Science Award 2009, presented an overview of the center and the activities carried out to date, while focusing on strengths and weaknesses The gathering was also an opportunity to dialogue about challenges that faces science in Chile and how to expand media influence. 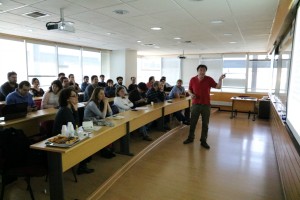 CAPDE joins this 3D project organized by Iniciativa Científico Milenio (ICM), which  consists on representing images through three dimensional technology. It will be soon available on website and applied for outreach activities. “This technology is very useful to make people to understand complex realities. It allows, for instance, to enter into a classroom, while the professor explains how mathematical modeling works”, said Fabián Castro, head of bussiness of the company that is developing this initiative.

Duvan Henao, Capde researcher, and Omar Gil, mathematician from Universidad de la República in Uruguay, talk in the radio show “Milenio” about the relevance of outreach activities addressed to young people in order to disseminate mathematics. The second part of the interview focused on “Primos entre sí”, the teaching theater play written by Omar Gil.

Capde sponsors the Exacta Festival, which will be held this year from 19th to 23th October 2015. The event is addressed to primary and high school students. They will enjoy attending theater plays, talks, seminars and workshops. Registration and more informationis available under exacta@tecya.cl/www.tecya.cl.

Capde strongly believes in the training and encouraging of young people, who will make the science of the future!

Did you know that the first college for women in Chile was firstly opened in 1877? In Europe, the situation was not much different, as we have to wait until 1817 to see this change. You have can more information about the women´s history in mathematical studied by listening Mónica Musso, Capde researcher, in Radio Universidad de Chile. “There is a lack of role models. And through initiatives like Colectivo de Mujeres Matemáticas en Chile we want to encourage joung girls, the future gerations, to be interested in mathematics”, pointed out Musso.